Results demonstrate benefits of drug in long-term treatment of thalassemia

TORONTO, ONTARIO – A new study published in Blood reports impressive results from a large, long-term prospective study examining the safety and efficacy of deferiprone, an orally active medicine for the treatment of iron overload in thalassemia, a rare genetic blood disorder. Deferiprone (Ferriprox) is the first oral iron treatment to be approved by a regulatory agency and serves as a hope for those patients who cannot tolerate the injectable drug that had been the only treatment available for the past 30 years. 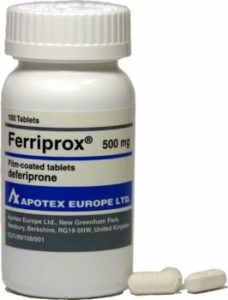 The study by lead investigator Dr. Alan Cohen of the Children’s Hospital of Philadelphia is the largest study to have reported continuous use of deferiprone over a 4-year period, and represents the most intensive long-term investigation on the safety and efficacy of an iron chelator ever published. Participants were monitored every week during the 4-year period. Cohen et al demonstrated that the oral medicine was effective in maintaining the body iron load despite continuous iron accumulation through blood transfusions in those patients. Moreover, the study showed that the incidence of agranulocytosis (a severe lowering of white blood cells) was less than previous estimates from smaller studies. Transient agranulocytosis occurred in only one of the 187 patients.

This important study in the field of thalassemia published by Cohen and his co-investigators follows on the heels of other studies which reported on the effectiveness of deferiprone in removing excess iron from the heart and in decreasing the risk of iron-induced heart disease.1 2 “The long term safety combined with its ability, not only to remove iron from the body, but also the heart, is seen as a major landmark for this new medication. As a result of scientists around the world carefully studying deferiprone for many years, a clear picture has emerged of a medication that is not only convenient for the patients, but one which appears to deliver protection from iron-induced heart damage,” said Dr. Vasili Berdoukas, an expert in the treatment of thalassemia, currently conducting research at the Aghia Sofia Children’s Hospital, Athens Greece, where thalassemia is a major problem.

As a result of the close and intensive monitoring of a large number of patients over such a long period of time, we can speak with certainty regarding the safety and efficacy of deferiprone, concluded Berdoukas.

One hundred and sixty two patients completed the first year of study and 84 patients completed four years of therapy with the same dose of deferiprone and no exposure to other chelators. The investigators sought to determine what would happen at a fixed dose of 75 mg/kg/day and found that iron stores, as assessed by serum ferritin levels, showed a significant decline among patients with an initial serum ferritin level greater than 2500 mg/L, while less severely iron loaded patients were generally maintained at a level comparable to their load achieved on their former injectable therapy.

“We are particularly pleased at the low incidence of agranulocytosis and that it is manageable by frequent monitoring of the white blood cell count. These results demonstrate the benefits of Ferriprox as a long-term treatment for thalassemia,” stated Fernando Tricta, MD, Medical Director, Apotex, Inc. and a study co-author.

Thalassemia major is a rare inherited anemia and affected children require blood transfusions every 2-4 weeks to survive. While the repeated transfusions extend survival to the 2nd or 3rd decade of life, iron in the transfused blood leads to a build up of toxic levels in the body, causing organ damage and premature death, primarily due to iron-induced heart disease. Prior to the development of deferiprone, treatment for patients with iron overload was limited to deferoxamine, a drug that requires daily injections for 8-12 hours. Despite 30 years of use of deferoxamine, cardiac disease remains responsible for 70% of deaths in thalassemia patients. To provide an alternative medicine, Apotex initiated clinical trials of Ferriprox, an orally active iron chelator in 1993. Presently, Ferriprox is approved as a life-saving alternative for patients in 27 countries including those of the European Union.
1 Anderson LJ et al. Comparison of effects of oral deferiprone and subcutaneous desferrioxamine on myocardial iron concentrations and ventricular function in beta thalaessemia. Lancet 2002; 360:516-20
2 Piga A et al. Comparative effects of deferiprone and deferoxamine on survival and cardiac disease in patients with thalassemia major: a retrospective analysis. Hematologica 2003; 88:489-96

For additional information, please contact:
Elie Betito
Director
Public and Government Affairs
Tel: (416) 749-9300 ext. 7366
ebetito@apotex.com
Ferriprox™ is the trademark of Apotex Inc. for deferiprone, an orally active iron chelator.
RE: The Status of Ferriprox at the Time of this Press Release: Ferriprox is on the market in 27 countries where the medicine is approved as a second line indication in transfusion-dependent thalassemia. Applications for approval of Ferriprox in the US, Canada and several other countries are to be filed in 2003 and 2004.

RE: The Claims Referred to in this Press Release: While the scientific statements about the benefits of deferiprone described in this Press Release are based upon the studies that have been conducted, Apotex advocates the use of Ferriprox according to the specific indications in each of the respective countries in which it is sold. Prescribing information is available from Apotex. Maintained by Apotex Inc., Canada